AltimeterTwo is an instant flight analysis tool for model rocketry, no computer required. It is small enough to fit in most rockets, and it provides 10 key flight performance measures on its sunlight-readable screen for each flight, including max altitude, top speed, engine thrust duration, peak acceleration, ejection timing, and total flight time.

No batteries required. AltimeterTwo is rechargeable and includes a recharging cable that works in common USB ports.

Will only work for model rockets.

The AltimeterTwo retains the rugged design, easily-readable LCD, small size, and rechargeability of the AltimeterOne. With the addition of a 3-axis accelerometer and a 4X speed increase in processing speed, it can provide a full suite of important flight statistics that can help you analyze and improve your rocket’s performance.

AltimeterTwo has been approved by the National Association of Rocketry for use in rocketry competitions. 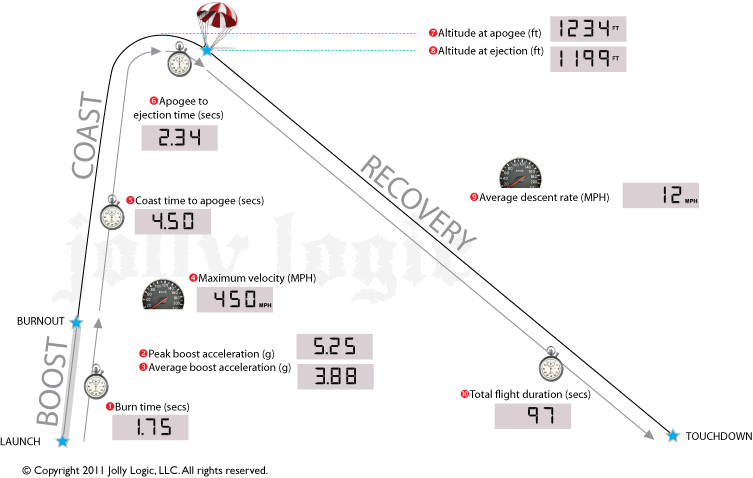 Here is a handy Microsoft Excel spreadsheet you can use as an AltimeterTwo flight log
(If you think of any improvements, email them to us at support@jollylogic.com.)

Just want the basics? Here’s how to use the AltimeterTwo, in as brief a form as possible:

1. Press and release the button quickly to turn the AltimeterTwo on or off.

2. Clear and reset for the next flight by holding the button down and releasing it when “Launch” appears.

3. Recharge by plugging it into a USB port on a computer. Make sure a red light appears when you plug it in; take it out after the green light appears.

Here’s a detailed walk through of how to operate the AltimeterTwo.

Turning It On and Off

Press the button and release it quickly to turn the AltimeterTwo on and off.

If you press the button and continue to hold it down, you will see Menu and then be presented with a series of scrolling choices on the screen, one after another, which you can select by letting go of the button.

Resetting for the Next Flight

If you hold down the button and let go when you see “Launch”, AltimeterTwo will create a new flight record and be ready for the next flight. On the screen, you will now see “Ready”.

The AltimeterTwo will automatically display each of the flight analysis items for each flight.

Here are the flight aspects analyzed by AltimeterTwo:

There are no reviews yet.

Be the first to review “Jolly Logic AltimeterTwo” Cancel reply